Vivid Sydney is an annual festival of lights, music and ideas. The vibrant outdoor festival attracts millions of visitors to Sydney, with the iconic Sydney Opera House being a key focal point of the festival. The array of light installations around Sydney are amazing, and the water is certainly a great place to experience the festival and fun vibes.

This year Sea Sydney Harbour is excited to announce THE LAUNCH of a NEW INTIMATE HARBOUR CATAMARAN CRUISE on board vessel Fleetwing II.

Fleetwing II is a luxury 16 metre motor catamaran cruiser that can accommodate for up to 46 guests. Consisting of four deck areas, with upper and lower deck spaces, a large internal cabin and easily accessible bow area, the vessel can be enjoyed in comfort in all weather conditions. The vessel has a modern and sophisticated vibe, with an on board bar and plenty of room to enjoy the harbour views and Vivid lights.

See the spectacular sights and sounds and enjoy the scenic views of Sydney’s enlightened buildings and landmarks. Enjoy the water, see the lights and landmarks and skip the crowds with a harbour cruise departing on Thursday, Friday, Saturday and Sunday evenings throughout the festival period.

This intimate cruising experience is perfect to bring along the whole family, or to enjoy with friends or colleagues, as you take in the breathtaking views of Sydney and the spectacular Vivid Sydney light display. 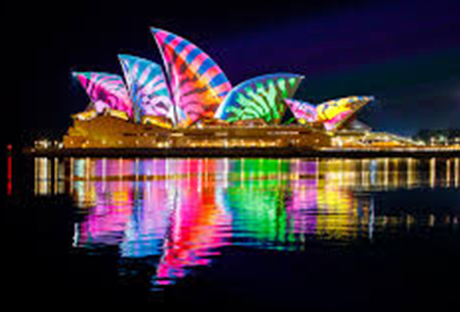 As the festival continues to grow each year there are more and more sites to see from the water and harbour cruises are becoming a popular way to see the lights. No more walking through the crowded streets – jump on a boat and experience the fun from the water!

Vivid Sydney 2019 runs from Friday 24th May through to Saturday 15th June 2019. Secure your ticket on board and be sure not to miss the boat!

Bridesmaids, stop the searching because Captain Frank has the perfect answer for your ultimate Hen’s party experience… Imagine you and the girls hosting your get together in the very heart of Sydney Harbour, drinking, laughing and creating memories on a boat!

Whether you are after a day or night event, you and your guests can exclusively hire a beautiful spacious catamaran to host your very own private party and let the fun begin!! Enjoy quality time with the besties and experience uninterrupted views of one of the world’s most beautiful harbours… and share your experience with Captain Frank and his team! 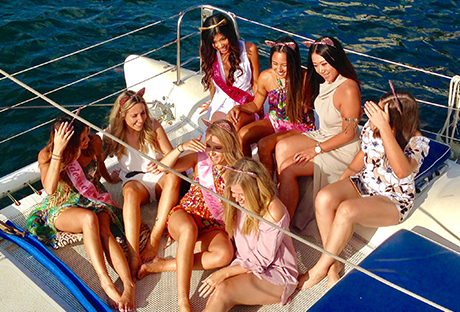 WHERE THE FUN UNRAVELS

The vessel is a beautiful catamaran that is available for hire on Sydney Harbour. The 10.5 metre Seawind Resort 1050 is an Australian designed and built sailing catamaran. Perfect for private hen’s parties, the vessel can accommodate for up to 30 people. Make use of the large internal cabin for formalities and party games and enjoy the easy access to the front bow area that will keep your party flowing. 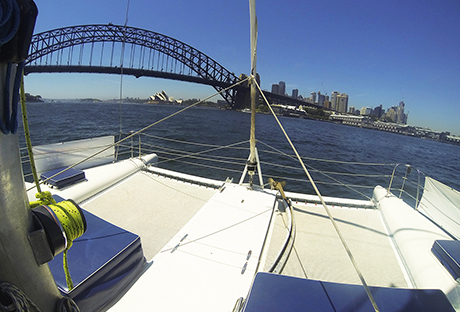 When hiring the boat there is an array of catering options to select from or you can opt to self cater. The ‘Waves of Platters’ menu is Captain Frank’s recommended option for Hen’s parties and includes a cheese, antipasto, wrap and fruit platter to graze on throughout the party. All drinks remain BYO, but what better way to ensure you have your favourite drinks on board!

ENTERTAINMENT FOR THE LADIES

If you’re looking to add some cheeky entertainment to the celebrations, the Captain himself will likely keep his shirt on – although what happens on the boat does stay on the boat – but we can certainly organise waiters to serve and entertain you on the day. All our waiters are friendly, dare we say sexy, come with a smile, and the bridal party won’t have to lift a finger. 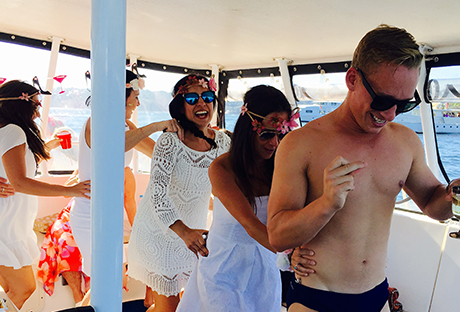 Alternatively why not set sail to the beautiful cityscape with one of the most sought after Sydney Drag Queens hosting your party – the one and only Prada Clutch! A multi-talented singer, performer, hostess, drag queen, showgirl & all-round entertainer she will have you in stitches from the minute you board the vessel and will be sure to make your Hen’s party unforgettable!

Or customise your cruising experience and opt for an alternate activity from the range of extra charter activities available. Either way your experience will be fun fun fun!

It’s never too early to start organising the ultimate Hen’s party for your bestie!! Captain Frank would love to have you on board and there is no better way to celebrate the bride-to-be than by enjoying your time with the girls, drinking, laughing and creating memories in the heart of one of the most beautiful harbours in the world.

Hosting a celebration on a boat calls for some great party theme ideas that are easy but definitely filled with costume fun! Captain Frank loves a great party theme and he loves to see new ideas on board the boats!

Theme ideas can definitely lift the fun of a party, however being an outdoor venue away from home you want something that your group will get on board with, but nothing too out there that it makes your guests feel uncomfortable.

The team put their heads together, and these were some of their top picks. Be sure to adapt them to make them your own!

Pick one of these party themes or create your own theme… the important thing is that you have fun fun fun!!!

The longest ever Vivid Sydney Festival will shine for 23 nights, illuminating Sydney Harbour, new and much-love precincts, and hosting vibrant music performances and big ideas talks. The festival runs from Friday 27th May through to Saturday 18th June 2016.

The sails of the Sydney Opera House will continue to be a key feature of the Vivid Lights festival and will transform into an animated canvas of the oldest Australian Indigenous art. Vivid Sydney’s brilliant lights also return to Chatswood, Central Park, Darling Harbour and the Australian National Maritime Museum, Martin Place and new precinct The Galeries, which becomes the festival’s first indoor precinct. Treasured attractions, yet new additions to the festival include Taronga Zoo and the Royal Botanic Garden Sydney, which will light up during Vivid Sydney in celebration of the monumental anniversaries both celebrate in 2016.

Beyond Vivid Lights, Vivid Music will pulse through the city with new sounds and venues in the line up. Vivid LIVE at the Sydney Opera House will unleash a series of incredible acts and storytellers, shaping the creative landscape for upcoming artists, who will headline Vivid Ideas.

Cruise with colour and creativity and experience the 5 star Vivid Sydney Festival from a prime location cruising Sydney Harbour. See the spectacular sights and sounds and enjoy the scenic views of Sydney’s enlightened buildings and landmarks. Aboard Kirralee, there are indoor and outdoor areas for viewing the light displays, so skip the crowds and experience the festival on a boat with Sea Sydney Harbour.

Ticketed cruises run for 1.5 hours and there are various departure times on each Thursday, Friday, Saturday and Sunday evenings throughout the festival. Cruises will also be running on the public holiday Monday 13th June.

Light refreshments and soft drink will be provided. Passengers can choose to BYO alcoholic beverages. No corkage fees apply.

Vivid Harbour Cruises are perfect to bring along the whole family and enjoy breathtaking views of Sydney and the spectacular light display!

What’s included?
• 1.5 hour charter aboard The Kirralee with an experienced skipper and deck hand/host. An intimate cruising experience with maximum passenger numbers of 30.
• Pick up and drop off at King Street Wharf
• Light refreshments and soft drink

Named Australia’s best tourism event for 3 consecutive years, this festival is not to be missed!! Why not experience Vivid Sydney aboard a harbour cruise with Sea Sydney Harbour.

Cruise with colour and creativity and enjoy 5 star views of Sydney’s iconic buildings and landmarks bathed in bright lights and vibrant colours. Find Sea Sydney Harbour on Facebook, like our page and follow the ‘Vivid Sydney Festival 2016 Harbour Cruises’ event to discover the latest information and keep up to date on ticket availability. We can’t wait to hear from you!

With the Christmas season fast approaching its time to start thinking about planning your office Christmas Party. Unwrap something new and fun this year and hire a catamaran to cruise around Sydney Harbour. Beside’s for meeting the Captain himself, here’s some top reasons why the phrase “I’m on a boat” will become the most popular saying in your office this Christmas!

Exclusive Venue – No more sharing restaurant space or a function centre with another party. This celebration is for your group only to celebrate all your hard work throughout the year and the holiday period. Don’t let anyone tell you otherwise!

Amazing Atmosphere – Being in a new environment away from anywhere that has previously been associated with work meetings of functions brings about a different attitude. Make your Christmas Party an occasion to truly be enjoyed by all. Your colleagues will feel like they can let loose a little and will have waves of fun.

Customised Experience – Whether you are keen for a day or night cruise, a party cruise or a more relaxed cruise that includes a dip in the water, the experience is up to you. Your experienced Captain can certainly make some suggestions, but you can customise your boating experience to suit your specific group.

Unique – How many people do you know who hire a catamaran exclusively for their Christmas Party? Everyone will love it and the views are breathtaking!

On trend – There is nothing cooler this Summer than being on a boat and screaming “I’m on a boat” with your friends and work colleagues. #nothingmoretosay

Move over “Merry Christmas” because this year its “I’m on a boat”. The Summer holiday period is set to be a good one! Trust me, you don’t want to miss this!

When it comes to entertaining on a boat you may think your food options are limited, however let me assure you that your choices are many.

Sharing your food is another way to share the love – I mean they often say a way to a man’s heart (or Captain’s heart) is through his stomach – so why not opt for platters and finger food to satisfy hunger and love in one go?

We’ve trialed some simple savoury recipes and tested them for preparation time and hunger satisfaction. See what Captain Frank’s favourite finger food option was and why not make use of this recipe next time your planning a celebration!?!

Great finger food that can be served hot or cold. Create your own flavour by mixing up the toppings you use – ideas include ham and cheese (as below), spinach and feta or sun-dried tomato and olive.