Vivid Sydney is an annual festival of lights, music and ideas. The vibrant outdoor festival attracts millions of visitors to Sydney, with the iconic Sydney Opera House being a key focal point of the festival. The array of light installations around Sydney are amazing, and the water is certainly a great place to experience the festival and fun vibes.

This year Sea Sydney Harbour is excited to announce THE LAUNCH of a NEW INTIMATE HARBOUR CATAMARAN CRUISE on board vessel Fleetwing II.

Fleetwing II is a luxury 16 metre motor catamaran cruiser that can accommodate for up to 46 guests. Consisting of four deck areas, with upper and lower deck spaces, a large internal cabin and easily accessible bow area, the vessel can be enjoyed in comfort in all weather conditions. The vessel has a modern and sophisticated vibe, with an on board bar and plenty of room to enjoy the harbour views and Vivid lights. 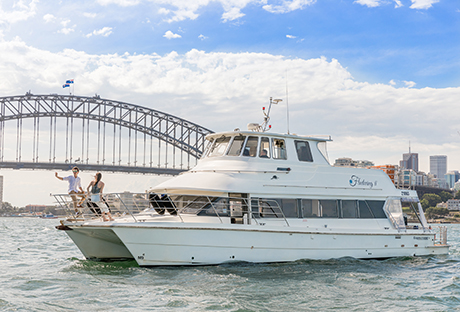 See the spectacular sights and sounds and enjoy the scenic views of Sydney’s enlightened buildings and landmarks. Enjoy the water, see the lights and landmarks and skip the crowds with a harbour cruise departing on Thursday, Friday, Saturday and Sunday evenings throughout the festival period.

This intimate cruising experience is perfect to bring along the whole family, or to enjoy with friends or colleagues, as you take in the breathtaking views of Sydney and the spectacular Vivid Sydney light display.

As the festival continues to grow each year there are more and more sites to see from the water and harbour cruises are becoming a popular way to see the lights. No more walking through the crowded streets – jump on a boat and experience the fun from the water!

Vivid Sydney 2019 runs from Friday 24th May through to Saturday 15th June 2019. Secure your ticket on board and be sure not to miss the boat!

Here’s a little secret… Captain Frank is a bit of a mummy’s boy (there’s nothing wrong with that), so with Mother’s Day just around the corner, it’s time to celebrate Mum like never before!

We’ve been shopping to find some of the best gift ideas for mum… Of course they all have a little nautical inspiration, and had to get the tick of approval by Captain Frank. So why not indulge mum in a little nautical love!!

1. Personalised Nautical Wine Glasses – We all know how hard mum works, so at the end of the day that glass of wine seems well-deserved. With these personalised Nautical Wine Glasses, mum can sip her favourite chilled wine in a coastal-inspired engraved wine glass. Personalise a set of 4 glasses with some engraving and mum will feel like she is sailing an endless ocean next time she sits down to indulge in her favourite wine. Don’t forget to include her favourite bottle for that added special touch!

2. Sea of Love Message in a Bottle – Remembering it’s the thought that counts shower mum in a sea of loving words! Send your personal special message in a bottle to create something unique and sentimental for mum. This unique gift is truly from the heart and your personal message can be printed, rolled into a scroll and placed inside a bottle of sand. It will truly emulate a feeling of a “bottle washed ashore” and will be a gift mum will cherish for a lifetime.

3. Experience Vivid on Sydney Harbour – For the mum who loves an experience, it’s all about spending quality time with family and friends – a harbour cruise to take in the Sydney sights and the lights of Vivid Sydney could be just the perfect gift idea! Select a night to visit the Vivid Sydney festival, which commences late May and runs to mid June, and enjoy the water together with the beautiful light display. Share an intimate cruising experience with mum aboard a beautiful catamaran and make your night even more special by stopping off for n indulgent dinner before boarding the vessel.

4. Nautical Fashion – For the mum who loves to be in style, consider a nautical fashion piece for her wardrobe or a beautiful accessory. Whether it be that sassy pair of shoes, a trendy nautical inspired jacket or something a bit more subtle with those timeless navy blue and white stripes, mum will sure be on trend when she heads out for the day. Start by browsing the catalogues of some her favourite fashion brands and no doubt you will soon come across a nautical inspired piece. It’s a staple item for those mums that love to be in style!

5. Summer Accessories – Does your mum love to be outdoors and get in the water? Spruce up her outdoor accessories and sporting equipment with some summer coastal inspiration and stock her up with those things that you know she uses and loves! Compile a beach towel and bag, some sunnies, a paddle or two and why not go big and purchase her that paddle board or kayak that you know she’s been eyeing for some time? It’ll be a great new hobby for her and will keep her fit, healthy and happy – who knows she may even let you borrow her new toy sometime!

We hope that some of these nautical inspired gift ideas float your boat and appeal to you mum!

The longest ever Vivid Sydney Festival will shine for 23 nights, illuminating Sydney Harbour, new and much-love precincts, and hosting vibrant music performances and big ideas talks. The festival runs from Friday 27th May through to Saturday 18th June 2016.

The sails of the Sydney Opera House will continue to be a key feature of the Vivid Lights festival and will transform into an animated canvas of the oldest Australian Indigenous art. Vivid Sydney’s brilliant lights also return to Chatswood, Central Park, Darling Harbour and the Australian National Maritime Museum, Martin Place and new precinct The Galeries, which becomes the festival’s first indoor precinct. Treasured attractions, yet new additions to the festival include Taronga Zoo and the Royal Botanic Garden Sydney, which will light up during Vivid Sydney in celebration of the monumental anniversaries both celebrate in 2016.

Beyond Vivid Lights, Vivid Music will pulse through the city with new sounds and venues in the line up. Vivid LIVE at the Sydney Opera House will unleash a series of incredible acts and storytellers, shaping the creative landscape for upcoming artists, who will headline Vivid Ideas.

Cruise with colour and creativity and experience the 5 star Vivid Sydney Festival from a prime location cruising Sydney Harbour. See the spectacular sights and sounds and enjoy the scenic views of Sydney’s enlightened buildings and landmarks. Aboard Kirralee, there are indoor and outdoor areas for viewing the light displays, so skip the crowds and experience the festival on a boat with Sea Sydney Harbour.

Ticketed cruises run for 1.5 hours and there are various departure times on each Thursday, Friday, Saturday and Sunday evenings throughout the festival. Cruises will also be running on the public holiday Monday 13th June.

Light refreshments and soft drink will be provided. Passengers can choose to BYO alcoholic beverages. No corkage fees apply.

Vivid Harbour Cruises are perfect to bring along the whole family and enjoy breathtaking views of Sydney and the spectacular light display!

What’s included?
• 1.5 hour charter aboard The Kirralee with an experienced skipper and deck hand/host. An intimate cruising experience with maximum passenger numbers of 30.
• Pick up and drop off at King Street Wharf
• Light refreshments and soft drink

Named Australia’s best tourism event for 3 consecutive years, this festival is not to be missed!! Why not experience Vivid Sydney aboard a harbour cruise with Sea Sydney Harbour.

Cruise with colour and creativity and enjoy 5 star views of Sydney’s iconic buildings and landmarks bathed in bright lights and vibrant colours. Find Sea Sydney Harbour on Facebook, like our page and follow the ‘Vivid Sydney Festival 2016 Harbour Cruises’ event to discover the latest information and keep up to date on ticket availability. We can’t wait to hear from you!

Vivid Sydney is a spectacular array of light, music and ideas. The festival is an annual event and there is always something new and fun to explore. If you’re a lover of art, music, live performances or just a fan of Sydney in general, you will love the Vivid Sydney festival! Captain Frank sure does!

Falling in love with Vivid Sydney is not a hard thing to do. Here are some of Captain Frank’s top reasons why he enjoys the Vivid Sydney Festival each year.

Planning to attend the festival this year? Share your pictures capturing the beautiful art and lights across Sydney on Instagram